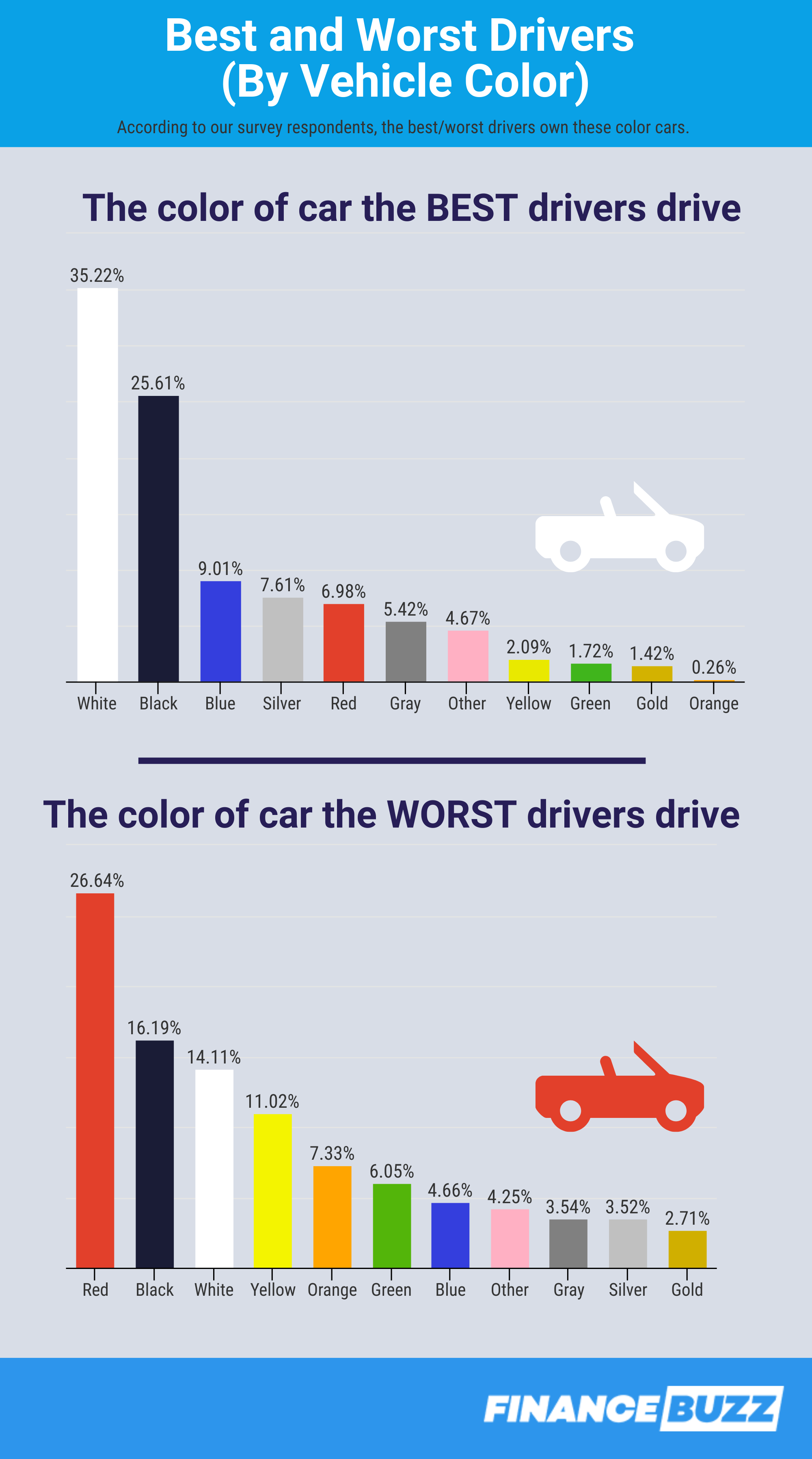 From work commutes to getting the kids to school on time to road trips, automobiles are integral to many different aspects of our lives. As we head into one of the biggest annual car-buying seasons of the year, our team decided to survey people across the United States to find out how they feel about their fellow drivers based on the color and manufacturer of their cars.

We also surveyed drivers about their own driving ability and behaviors (as well as the color and manufacture of their cars) so we could see how well perception aligns with reality.

While people may think those who drive white cars are the best drivers and those who drive red cars are the worst, are they correct? Are BMW or Audi drivers more likely to roll through a stop sign? Which group has received the most traffic tickets, those who perceive themselves to be good drivers or those who feel they are average?

We discovered the answers to these questions and more, so read on to find out.

What color cars do the best and worst drivers drive?

To start off our driver survey, we asked people to identify which car color they most associate with good and bad drivers and found a surprising consensus on both counts.

When it comes to “good” drivers, over 35% of people think those who operate white vehicles are the best on the road, with another 25% saying people who drive black cars are tops. Those two colors account for over 60% of responses, with no other color earning more than 9% of responses. Drivers of blue, silver, and red vehicles round out the top five when it comes to those who are perceived to be the best.

On the flip side, there was also a clear winner when it comes to the color car people feel the worst drivers operate. 27% of people identified drivers of red cars as the worst on the road, a total of over 10 percentage points higher than the second-place choice, black. Two other colors were chosen by more than 10% of respondents, with white earning 14% and yellow 11%.

But exactly how well does perception match up with reality? As part of this same survey, we asked respondents to tell us the color and brand of car they drive and give us data on certain indicators of driving skill, including how often they have been pulled over, received tickets, and gotten into accidents while driving. We were then able to cross-reference that data to create the chart you see above, which shows the average number of times drivers of different colored cars experienced these negative driving outcomes.

When looking at the data, we see that while over one-third of people feel that those with white cars are the best drivers, those drivers have actually been pulled over, received traffic tickets, and gotten into accidents more times on average than the drivers of any other color car.

Interestingly, the car color identified as belonging to the worst drivers, red, appears to belong to some of the best drivers based on these metrics. Drivers of red cars have been pulled over the fewest times and received the fewest tickets on average. They are also middle of the pack when it comes to how many accidents they have gotten in. It sure seems like people should start being warier of drivers in white cars and more forgiving of those in red ones!

We also presented drivers with a list of 10 poor driving behaviors and asked them to identify those they are guilty of committing on a consistent basis. We then again cross-referenced their responses against the color of their car to find out which car colors are most likely to commit different vehicular faux pas.

Having looked at the available data, it appears our survey respondents are on to something when it comes to the car colors of bad drivers, even if they were overly harsh to red cars. Our survey identified black, white, and yellow cars as belonging to the second-, third-, and fourth-worst drivers. And indeed, at least two of those three colors were driven by owners most likely to commit eight of the 10 poor driving behaviors outlined above. In fact, those three colors make up the top three for 40% of the list of bad behaviors, proving that drivers with vehicles of those colors are the true pests of the road!

What brand of car do the best and worst drivers drive?

We also asked people to tell us their feelings regarding their fellow drivers based on the make/brand of car they drive.

While there were over 25 different vehicle manufacturers to choose from, we will only focus on the top 10 brands our survey identified as belonging to the best and worst drivers. In an interesting turn of events, our survey respondents chose drivers of the same car brand as both the best and worst drivers — BMW earned over 17.5% of the “best” votes and nearly 12.5% of the “worst” tally.

Five other car brands appeared on both lists. Toyota finished second when it comes to the vehicle brands perceived to be driven by the best drivers, the best finish of any brand that didn’t also show up on the top 10 worst drivers list. Conversely, Dodge drivers finished third-worst in our survey and were unable to crack the top ten on the best drivers list, while the two brands ahead of them are on both lists.

We once again checked how bias stacks up to reality. We found the 10 car brands owned by the highest percentage of our survey respondents and then found the average number of times owners of each brand have been pulled over, received traffic tickets, and gotten into accidents while driving.

While there are strong opinions on the driving ability of BMW drivers according to our survey, those with a more negative opinion appear to have a more accurate perception. BMW drivers have been pulled over the most times on average and have received the highest number of traffic tickets on average. They are well ahead of most other brands on this list in both categories. They are also second when it comes to the average number of accidents, with 3.11. Only Audi drivers have been in more accidents on average (3.27), and no other car brand has an average accident number even half as high as those two.

What Happens to Your Digital Assets When You Die?

When it comes to the actual “best” drivers, the data shows us the winner is a brand that wasn’t included in either of our lists, failing to be identified as either a top 10 best or worst brand when it comes to perceived driving skill. We found that, on average, Hyundai drivers have been pulled over the least, received the fewest tickets, and gotten into the fewest accidents.

When looking at how likely drivers are to engage in different poor driving behaviors based on the brand of car they drive, our survey results align with the hard data. Audi and BMW drivers were much more likely to get pulled over, receive tickets, and get in accidents. And drivers of those brands were first- and second-most likely to commit seven of the ten poor driving behaviors in our survey, with Audi drivers being most likely for six.

Audi and BMW drivers were both identified in our survey as being in the top 10 worst drivers based on perception, had the worst driving records of the 10 most popular brands, and are most likely to engage in the majority of the poor behaviors mentioned above. Given all that, it might be a good idea to give those kinds of cars a wide berth next time you are out on the road!

There appears to be a disconnect between the kinds and colors of cars that people associate with good and bad drivers. To explore that idea further, we asked survey respondents to tell us how good of a driver they feel themselves to be on a 0-10 scale. We then compared self-reported driving history to self-identified skill levels to see how well perception aligns with the truth.

An even 75% of people self-identified their driving skill at an eight or higher, with 26.6% giving themselves a perfect 10.

Given how the rest of the survey went, our team was not surprised to find that once again self-perception falls well short of reality. Those who gave themselves a perfect 10 and identified themselves as the best drivers are actually among the worst by their own account.

Self-identified 10s have been pulled over the most, have received the most tickets, and have gotten into the most accidents, on average.

Even more interesting is that even those who identified as nines aren’t much better, as they have been pulled over the second-highest average number of times and are third in terms of average numbers of accidents and tickets.

On the whole, it appears many drivers have an over-inflated sense of skill, a lack of self-awareness, or some combination of the two that makes them feel they are better behind the wheel than they actually are.

In terms of car brand, BMW once again took the crown, earning almost 25% of responses and doubling the second-place finisher of Mercedes-Benz. So if you want your fellow drivers to think you are attractive, it might be time to invest in a black, white, or red BMW.

Driving improvements in your life

No matter what kind of car you have or what kinds of behaviors “drive” you nuts on the road, it is important to protect yourself and your vehicle. Here are some tips on how to do that:

How to Cancel Car Insurance (and Save on Your Next Policy)