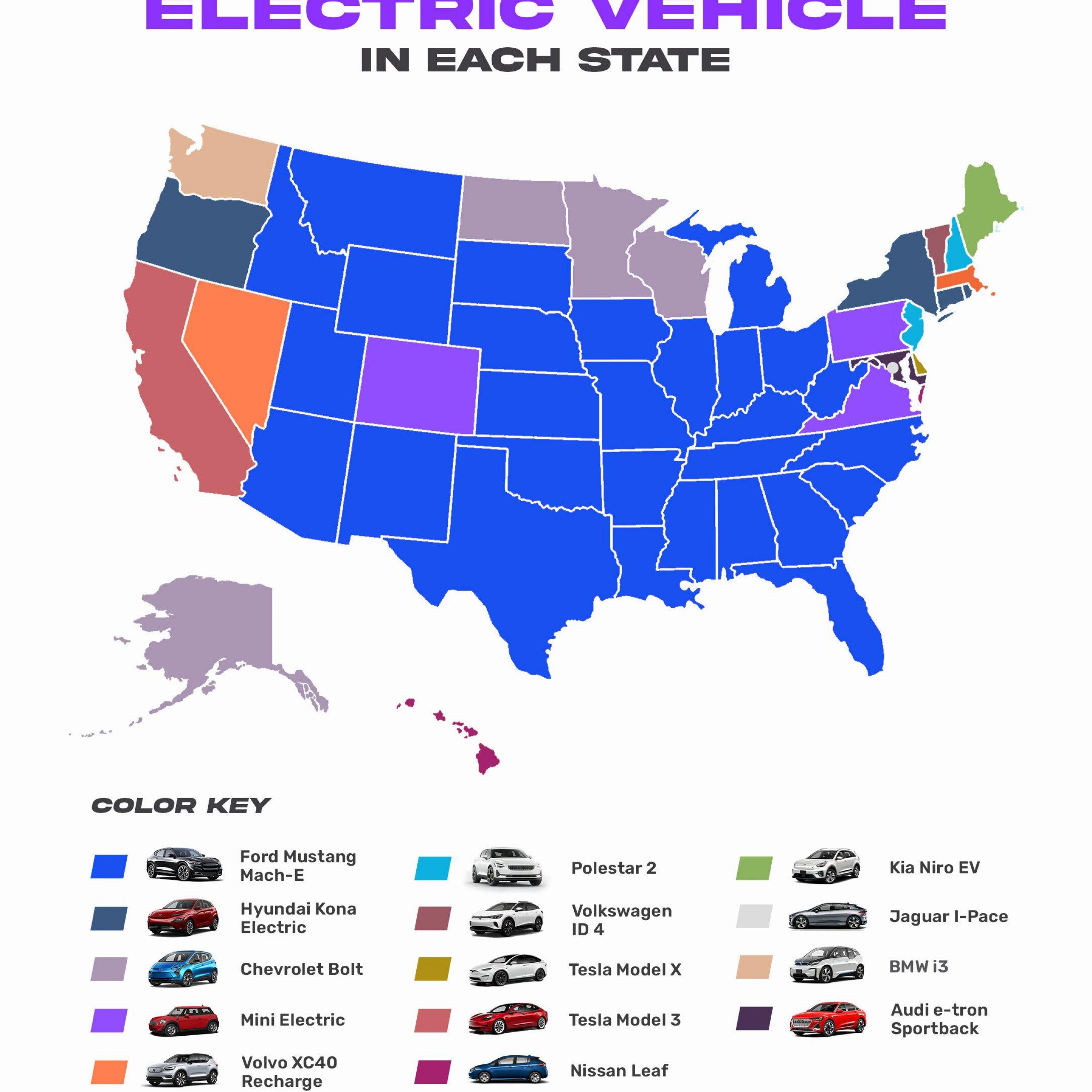 A couple hundred years later, EVs are seeing more widespread usage due to technological developments and advancements in the modern world. To encourage adoption of EVs to aid in the movement toward a greener earth and sustainable society, governments all over the world introduced incentives in the early 2000s.

Much like the adoption of the internet, technological advancements happen rapidly. That’s why it isn’t surprising to hear that many major automotive companies plan to manufacture only electric vehicles in the near future. Volvo is one of those companies, planning to produce only electric cars from 2030 onward. And the consumer demand seems to back this move.

Within the first half of 2021, more than 2.65 million people purchased electric vehicles, which is a 168% increase from 2020 EV sales. Searches for electric vehicles, brands, and models have spiked too, with search interest soaring 1,350% since 2020.

These trends inspired our team to explore electric vehicle adoption country-wide and determine which EVs are the most searched in the U.S.

The most popular electric vehicle in each state

You might find the state-by-state results unexpected — because though Tesla is a popular company, the cars are surprisingly uninteresting to most Americans.

To determine the most popular EV by state, we looked at years’ worth of Google Trends information and compared search trends for 20 cars currently available for sale in the U.S.

There is a clear winner when it comes to the most in-demand electric vehicle, and it’s the Ford Mustang Mach-E. The Mach-E was the top-searched EV for over half of the country, taking the top spot throughout the entire southeast, including Texas and Florida. Recently, this particular model won the Motor1 Star Award for the best electric vehicle — just one of the accolades this EV can boast.

The second-place EVs are in a close tie. Winning four states each, the Chevrolet Bolt and the Hyundai Kona Electric are the second-most popular electric vehicles in the U.S.

The Kona Electric is a popular EV model in the New England region. It’s the favorite electric vehicle in Rhode Island and Connecticut. The Kona Electric is also the most searched EV in New York state. On the other hand, the Chevy Bolt is increasingly popular in the Great Lakes region. This EV won Minnesota and Wisconsin, as well as North Dakota and Alaska. It’s obvious these two electric vehicles can be great choices for states that weather intense winters.

The fourth place winners are another tie — this time between two different models manufactured by Volvo. The ​​Volvo XC40 Recharge and the Polestar 2 were the top-searched EVs in two states each — Massachusetts and Nevada for the XC40, whereas the Polestar 2 won New Hampshire and New Jersey.

Ford’s Mach-E is the top-searched EV in 28 states. But with a recent recall of the vehicle, we wanted to look at whether Mach-E lovers had a backup choice.

In September 2021, Ford recalled the Mach-E because the glass on both the windshield and the panoramic glass roof panels could become loose. That’s why we wanted to look at whether Mach-E lovers had a common second choice in EV models.

As it turns out, the Chevy Bolt is the most common second choice for would-be Mach-E drivers. Th​​e Chevy Bolt was runner up in 18 of the 28 states that favored the Mach-E.

9 Secrets Your Health Insurer is Keeping From You

These are the most popular Tesla models in each state

To further explore the popularity of Tesla, we looked at the four Tesla models currently being delivered to customers: Model X, Model Y, Model S, and Model 3.

The Tesla Model X is the most popular, coming out as the most searched Tesla car in 33 states. The 2022 Model X is a luxury SUV, starts at $79,990 and can hold a charge for 340 to 360 miles. In addition, this model has the option to fit up to seven people, which makes it a more feasible option for families.

The second most popular Tesla vehicle is the Model S, which won 17 states. The 2021 Model S starts at $69,420 and can hold a charge for 387 to 520 miles. The Model S was the first highway-capable, mass-produced EV. But the Model S is declining in sales as the Model 3 is similar at a lower price.

Even though the Model Y is technically outselling the Model 3 in California, this Tesla vehicle is not the most-searched EV in any state. Starting at $39,990 and boasting a mileage range of 244 to 326 when the battery is fully charged, this EV is still a popular choice for would-be electric vehicle owners.

With Tesla being such a popular company, many people wonder if buying one of the Tesla models could actually pencil out financially. To answer this, we broke down the numbers to help you determine if a Tesla is worth it for you.

Even if you decide a Tesla vehicle isn’t right for you, it could still be worthwhile to learn how to invest in Tesla. After all, it is one of the most sought-after stocks right now, and its innovative efforts are supporting the advancement of renewable energy.

There are ways to invest in alternative energy sources beyond buying an electric vehicle or purchasing Tesla stock. If you’re concerned about the environment and want to become a more socially responsible investor, there are a bunch of ways for you to invest in renewable energy.

Value-based investing is a fantastic way to do just as it sounds: invest in what matters to you. ESG funds help you do that, but what does ESG mean? ESG stands for environmental, social, and governance. These are factors investors use to analyze a company’s impact beyond the money they make.

If you’re looking to invest in renewable energy or you’re worried about the usage of fossil fuel, an ESG fund might be a good fit for you. An example of an ESG fund you could invest in is iShares Global Clean Energy ETF.

Ellevest is an example of a service that offers “impact portfolios,” which are created with ESG criteria. You can read more about the service in our Ellevest review.

A components manufacturer is a company that creates and possibly installs renewable energy sources such as solar panels or wind turbines.

An example stock you could purchase in this category could be Albermarle Corp., a company that makes lithium batteries that help power EVs.

Are electric vehicles the auto investment of the future? Possibly, especially as the adoption of EV technology and EV models is increasing and likely to continue increasing at a rapid rate.

Not everyone is ready to make the jump from a traditional gas-guzzler to an electric car today, but there are other ways for you to clean up your carbon footprint in the meantime:

DadeLoan collected Google Trends search data on the most popular electric vehicles in the U.S., based on the best-selling EVs of 2021. This data was pulled on Oct. 7, 2021. The time frame for the collected data was set to the “Past 12 Months.” In the event of ties in any state, to determine the winner, the terms were compared head-to-head within Google Trends.

Get a quote now

Get a quote now