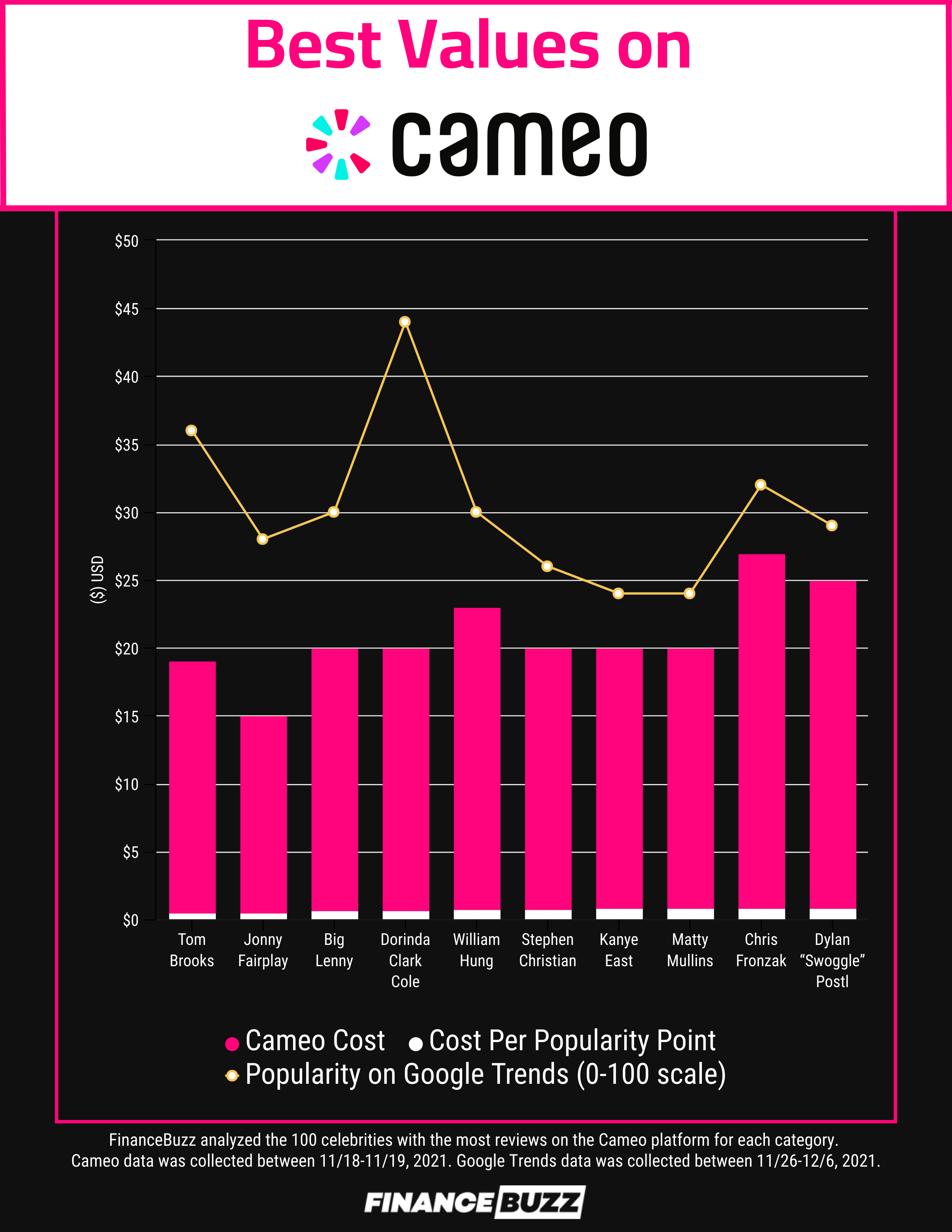 Have you ever dreamed of a personalized shoutout from your favorite actor, athlete, musician, or reality TV star? Thanks to the internet, that shoutout can be yours for the right price.

Cameo is a popular website where people pay their favorite celebrities to record personalized videos. As shipping deadlines fast approach, a Cameo video might even make a great last-minute gift for someone on your shopping list.

We pulled data on the costs and careers of some of the most popular celebrities on the platform. From there, we were able to find which celebs cost the most and least overall, which ones offer the best value, and more.

The best and worst overall values on Cameo

For this analysis, we collected data on the 100 celebrities who have received the most reviews in each of four categories: actors, reality TV stars, athletes, and musicians.

After evaluating all 400 qualifying celebrities, we found that the 10 listed above represent the best value for fans. Each Cameo costs less than a dollar per popularity point, and none cost more than $30 overall. Leading the way are 90 Day Fiancé’s Tom Brooks and Survivor’s Jonny Fairplay, both of whom charge less than 55 cents per popularity point and under $20 per video.

On the flip side, we also found the celebrities who are the worst value compared to their average Google Trends popularity score. New York Mets slugger Pete Alonso tops this list, charging $300 per Cameo despite averaging a Trends score of 5 out of 100 over the course of the last year, translating to a whopping $60 per popularity point.

This list also features the three most expensive overall Cameos in the entire analysis, with actor Tom Felton pricing himself at $599, actor Conrad Ricamora charging $999, and Shark Tank’s “Mr. Wonderful” Kevin O’Leary pricing his videos at a minimum cost of $1,500. Of the 400 celebrities we evaluated, those are the only three charging more than $500 per Cameo.

The actors who are the best and worst value on Cameo

Another Harry Potter alum makes the worst value list. Tim Felton clocks in as the fourth-worst value. There is one other media franchise with actors on both lists. Fred Stoller, the famous Soup Nazi from Seinfeld is number 10 on the best values list while John O’Hurley, who played Elaine’s boss J. Peterman, finished as the eighth-worst value among actors in this analysis.

We also tracked the shows and movies in which the 100 most-reviewed actors appeared. For every television show with at least two cast members included in our evaluation, we found the average cost for a Cameo from anyone on the show.

At the high end of the spectrum, the average cost for a Cameo from someone who appeared on The Office is $187. On the low end, Game of Thrones fans are looking at an average cost of just $65.

The world of reality TV is more robust than ever, with longstanding franchises like Survivor and Big Brother sharing the reality landscape with newer shows like 90 Day Fiancé and Below Deck.

When looking at the 10 best reality TV values on Cameo, two shows make up the majority of the top 10. 90 Day Fiancé and Rupaul’s Drag Race each placed three personalities in the top 10.

Sam’s Club vs. Costco: Where Can You Save the Most?

There is much more diversity when it comes to the worst values in reality TV. Only the Below Deck franchise places multiple personalities in the top 10. The worst overall value is the former host of The Bachelor, Chris Harrison.

Only one show, The Bachelor, features an average Cameo price tag over $200. At the same time, fans of Big Brother and American Idol can expect to pay less than $50 on average to get a shoutout from the people made famous on those shows.

We also broke down Cameo costs by TV network. ABC, home to the aforementioned Bachelor franchise, has the most expensive average price, while Lifetime stars are the most affordable, with an average cost of less than $65.

The athletes who are the best and worst value on Cameo

Looking at the best values in Cameo’s athletes category, combat sports dominate the list. Between professional wrestling and mixed martial arts, seven of the top 10 spots are combat athletes.

Two of the athletes on this list are true Hall of Fame values — both Randy Couture and Forrest Griffin are in the UFC Hall of Fame and charge $50 or less for a Cameo.

While the athletes who are the best values largely came from the world of fighting-based sports, there is much more diversity on the list of worst values. Eight different sports are represented in the top 10, with baseball being the only repeat.

Speaking of baseball, Mets first baseman Pete Alonso represents the worst value in any of the four categories we looked at, not just sports. Despite winning the 2021 Home Run Derby, Alonso averaged a popularity score of just 5 points out of 100 on Google Trends over the last year. At the price of $300 per Cameo, Alonso’s fans are paying $60 per popularity point.

The only other celebrity in the entire analysis to cost more than $50 per popularity is also an athlete, race car driver Helio Castroneves.

When looking at sports represented by athletes in our analysis, golf athletes charge the highest average cost for a Cameo at $275. That is over five times more expensive than the cost for Olympic athletes, who are the least expensive.

When looking at average costs by team, Green Bay Packer players and alums top the list with an average cost of $175. Athletes associated with the Houston Astros charge just $33 per Cameo, the least of any team.

The musicians who are the best and worst value on Cameo

Seven of the 10 most affordable musicians on Cameo cost a dollar or less per popularity point. This list covers a wide range of musical genres, from gospel music to rap to metal, showing that music fans have a lot of options for finding an affordable Cameo to match their musical tastes.

The most affordable genre of musical artists in Cameo’s 100 most-reviewed musicians are those who specialize in gospel music. Gospel artists charge just $35 per Cameo on average. That’s less than half of what the next least-expensive genre, K-Pop, charges.

In terms of an artist’s role in a band, our analysis shows saxophonists charge the most on average, even more than frontmen. Among different band members, bass players are the most affordable artists on Cameo.

Tips on how to save on gifts

Cameos could make great gifts for Christmas, birthdays, or any special occasion. With a little research, any gift-giver should be able to find a fun and memorable Cameo to fit their budget. But whether you’re buying friends or loved ones a shoutout from their favorite celeb or purchasing more traditional presents, here are some tips on how to save on gifts:

The DadeLoan team evaluated the 100 celebrities with the most reviews on Cameo in each of the following categories listed on the site: Actors, Reality TV, Athletes, and Musicians. For each celebrity, we found the minimum cost they charge for a Cameo video. This data was collected Nov. 17-19, 2021.

We also collected Google Trends search data for each celebrity. We looked at the average weekly search volume in the United States for each celebrity over the last 12 months. Trends data is represented as a measure of popularity on a 0-100 scale and is normalized by Google to account for factors such as geography, population size, and search volume relative to other terms. Google Trends data was collected from Nov. 29 – Dec. 6, 2021.

When calculating the average costs in different categories, we only included categories where there were at least two celebrities represented in our analysis.